Ford Dealership Gets a Major Makeover with Rousseau

Building a new dealership is no easy task and requires finding manufacturers who will work with you in a partnership. By collaborating with Rousseau, Team Ford in Alberta was able to build a unique solution that responded to the specific needs of the dealership.

Having decided to build a new dealership, Team Ford needed to update its service and parts departments.

To build a functional and attractive service department for technicians, and an efficient, industry-specific storage system for the parts department.

The Team Ford dealership had been operating out of the same building for nearly 30 years when they decided to demolish and replace it with a more modern construction. At the same time, they decided to completely revamp the storage and workstations their employees would be using.

Service manager Steve Yakimchuk and parts manager Kirk Rendall contacted various automobile dealerships in the region to see what solutions they were using. As part of a larger automobile group consisting of 32 dealerships, Team Ford's managers had access to a number of businesses like theirs that would have used different manufacturers for similar projects. They researched solutions among newer dealerships, but also among older ones built 10 to 15 years ago to see how the products had evolved over time. They selected several manufacturing companies to bid on their project, including Rousseau Metal Inc.

This is when John Fontaine, a regional sales rep for Waymarc Industries and specialist in Rousseau products, met with Team Ford to present a variety of options. Speaking of the work that went into the new parts department, John said, "Together with Shawn Larson, Waymarc’s head designer, we worked on designing benches that would work for each technician, yet have the wall-to-wall design the customer wanted with no spaces between the benches". The Rousseau expert also ensured that each technician had enough storage for tools and that space was organized with attention to aesthetics. For example, levelling glides were to be concealed and out of sight.

When it came to the parts department, John Fontaine and Shawn Larson worked closely with Kirk Rendall to create the best possible plan for the space that Team Ford had allocated. When talking about working with the Rousseau specialist Waymarc, Steve Yakimchuk of Team Ford stated, "They pretty much helped me from start to finish. I had a general idea of what I wanted and through roughly drawn sketches and short conversations, he came back to me with some proposed layouts and we worked to refine what we had. Their expertise led me to what I have now."

Rousseau workstations ultimately gave the service department a clean and organized look, along with sufficient storage for each employee and heavy-duty products that will last them for years to come. And in its new parts department, Team Ford now stores small parts in shelving drawers and larger items in the mini-racking units. Hanging panels installed at the end of aisles can be used for hanging other items. Finally, the storage units specially designed for the auto industry, mainly mini-racking with rails and hooks, allow for storage of objects that are irregular in shape.

Steve Yakimchuk maintains that the service department "is a better environment. Visually, when you walk into our shop, it looks organized. Because we have wall-to-wall Rousseau, each technician gets a greater work surface than if they had their own toolbox. That is probably one of the biggest benefits." One of the unexpected effects of the project, according to the service manager, was the increased ability for Team Ford to attract new employees. He explains that "In Alberta, it is extremely difficult to find technicians. We have an employee shortage out here." With the new storage, potential technicians are truly impressed and want to work in such a well-structured environment.

Happy with the results, the parts manager at Team Ford recounts his experience with Rousseau, "We basically looked at all the products out there and at the end, I felt that Rousseau’s options were better. What I really like about Rousseau is their willingness to work with you and do some custom-type work. The quality is great. I think right now they are the best products available out there." John Fontaine attributes much of the success of the project to the easy collaboration with Rousseau, "There were many people at Rousseau who were involved in bringing this project to successful completion. Gerald Gustavson, Rousseau’s regional manager, and Jody Smith, Rousseau’s project manager, worked hard to meet all of my demands and requests that were extremely unique. Not many companies would have the resources or willingness to do this, but Rousseau did."

The people at Team Ford have now been working out of their new building for a few months and have been very satisfied with Rousseau products. "It is definitely what I would recommend. There is the combination of shelving and drawers, and everything you need can be custom built for your situation." 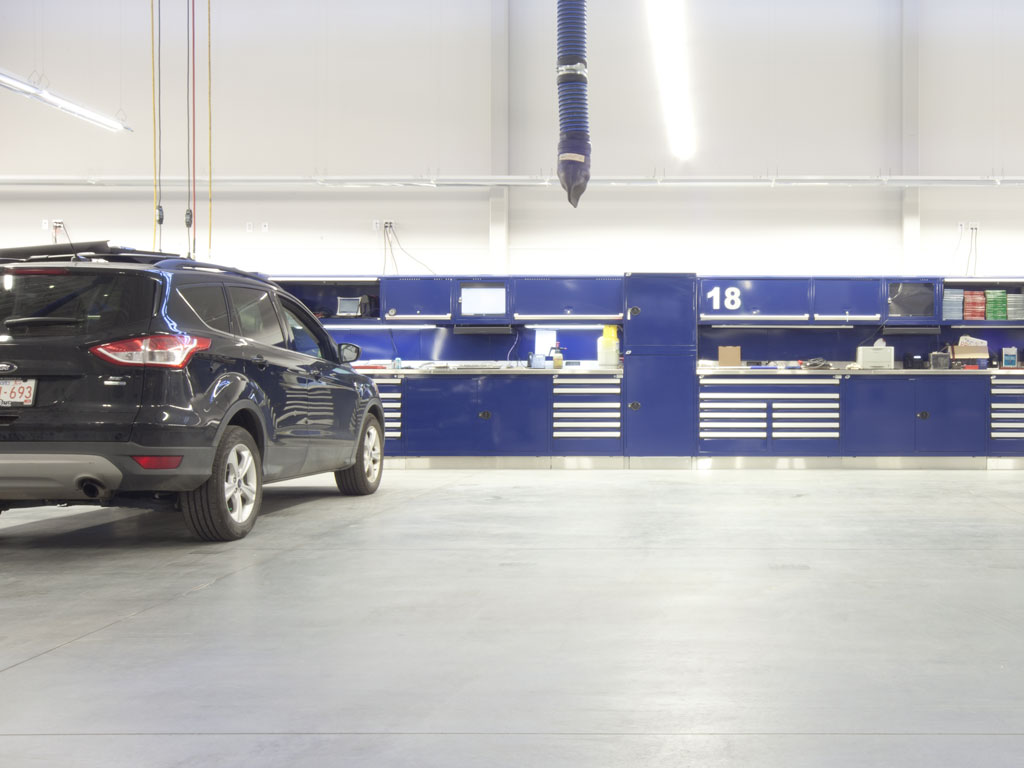 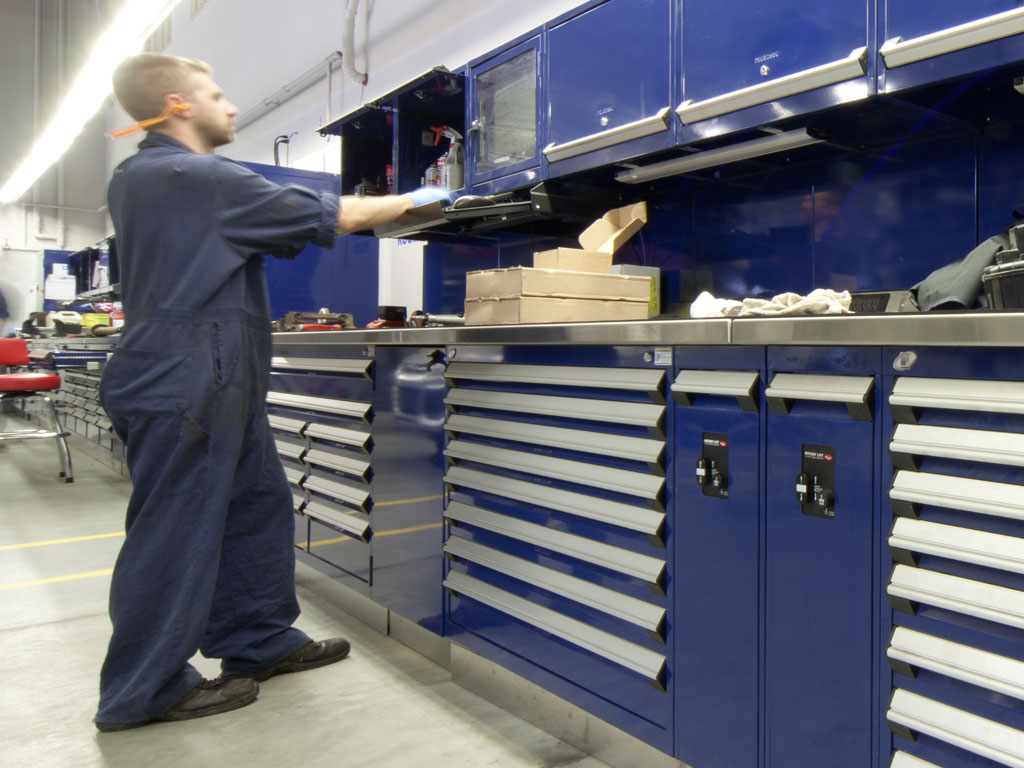 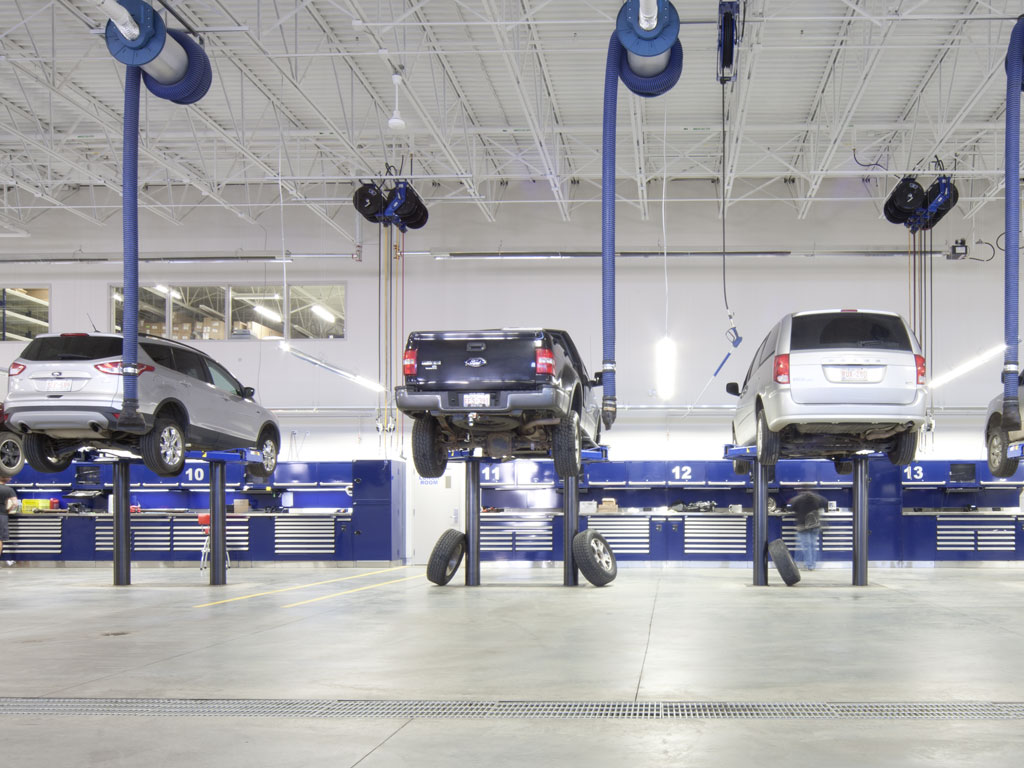