Tested over a year-long period by a hospital's maintenance department, the R-Go Motorized Toolbox impressed users with its reliability and safe transportation capabilities.

A refined product was needed for a hospital environment but one that could also handle rigorous maintenance tasks.

Use a solution for effortless and safer transportation.

Rousseau originally approached the maintenance department of a healthcare facility for trials of the R-Go Motorized Toolbox. "It was very important to target users that would use the R-Go to its full potential," said David Flamand, a design engineer. With multiple wings having been built over the years, this hospital was the ideal environment to try out the benefits of this new product before its market launch.

Mr. Jacques Boutin, a cabinetmaker and locksmith, was selected to test the R-Go for his daily tasks. He had been using an R cabinet for several years so was already familiar with Rousseau products.

After a year using the R-Go, Jacques was a very satisfied user: "the motorized toolbox definitely adds value for a company." Among its benefits, he highlights that he can "effortlessly move a toolbox carrying a 725 lb. load and he can stop immediately, which is a significant safety feature." To cut down on unnecessary trips, toolboxes have also become portable workstations for maintenance employees. But this didn't stop Jacques from traveling 200 km per year with his motorized toolbox, thanks to its battery life of up to 20 km.

With a new wing built adjacent to the main building, there is now an 8" uphill rise between the two buildings that requires extra effort and can lead to injuries. However, the toolbox's motorization makes easy work of this. Jacques reported that "even with slopes, the toolbox weight is not a problem." As David Flamand explained, "The architecture of the building and the requirements of healthcare facilities were perfect for testing certain aspects of the product. Moving loads must be done carefully in areas with patients and more quickly in corridors used by staff to increase efficiency." The guaranteed instant stop feature also provides increased safety for the user. Jacques also noted that "because the toolbox stops quickly and easily, it significantly reduces the chances of hitting a stretcher, a colleague in a hurry, or someone distracted by their mobile phone, for example."

Whether used for easier trips on goods lifts or to simply benefit from the instant stop feature to avoid collisions, the R-Go Motorized Toolbox meets the strictest ergonomics and safety requirements. Could this product ultimately mean better retention of employees with the most experience? Based on the satisfaction and enthusiasm from Jacques Boutin, the answer to that is a resounding yes! 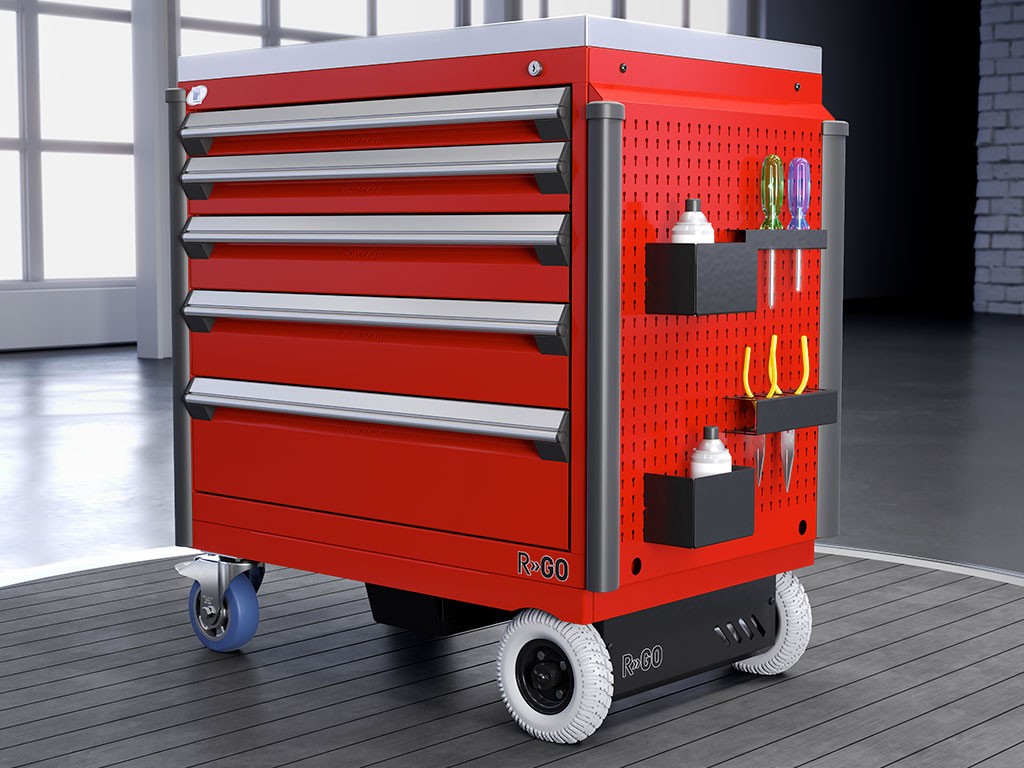